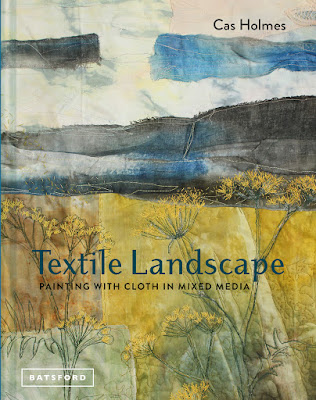 With her rich use of colour, stitch and mixed media, textile artist Cas Holmes exploits the tactile nature of textiles to turn traditional approaches to landscape on its head. Cas guides you through every stage of the creative process, building unique and beautiful works of art through observation and gathering material, experimenting in stitch, collage, screen printing and appliqué, and presenting small pieces and huge installations alike with their own sense of space, time and location.Her fascinating exploration of our relationship with our environment – and the effect of the local landscape on our own memories and imagination. Textile Landscape spans the UK, Europe, USA and Australia, including her own personal, local pieces and travel diaries as well as work from international artists. 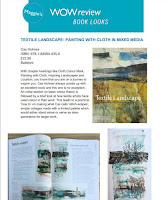 With chapter headings like Cloth Colour Mark, Painting with Cloth, Inspiring Landscapes and Location, you know that you are on a journey to inspire you. Cas Holmes always comes up with an excellent book and this one is no exception

A short extract from an insightful review by John Hopper of Inspirational magazine (issue 18).
'The textile interpretation of landscape through your hands and your eyes is her ultimate goal, and with this book that goal should be well within your grasp' 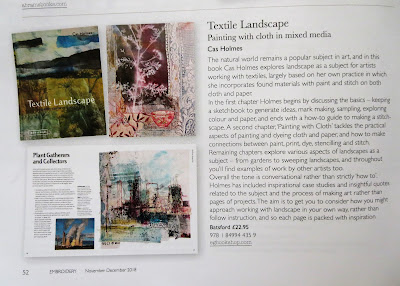 We found it very difficult to choose which bits were the highlights to include in this review.  It is impossible to decide on the priorities, the content is all so valuable!  Holmes covers so much – yet this can only be a positive – Cas you cause us problems!
Mr XStitch review by Ailish Henderson. Full review here

This isn't really a "how to" book. It isn't simply eye candy either. It's a generous look into this artist's process. Her observations and treatment of landscapes are superb. I recommend this book for textile and mixed-media artists. The binding and paper are beautiful, photographs and text are clear. The text is inspirational. I admit that I am biased. I am a Batsford fan!  CS Lewis USA

All my publications are available to order from me or at good book shops,  Amazon,  Book Depository ) Please contact me for further details. Marking your enquiry 'Book'. Signed copies of Batsford publications £25 inclusive of postage (in the UK only) 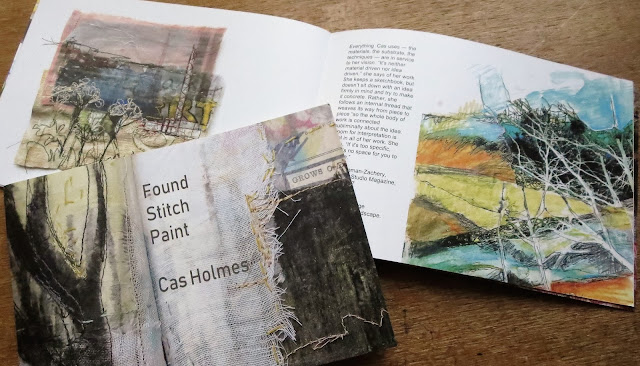 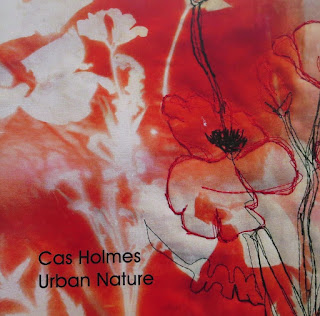 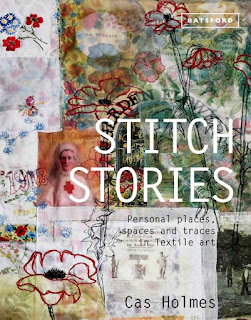 Everything, from a walk in the park to an exotic trip, can provide inspiration for textile art. See how to record your experiences in sketchbooks, journals, and photographs to create personal narratives that become beautiful stitched-textile pieces. Acclaimed textile artist Cas Holmes discusses such techniques as creating layered collages, "sketching" in stitches, and working with composition and colour. The result will be unique—uniquely you!

'The exercises and tutorials are cocooned within a much broader exploration of what it is to create textile art that is meaningful to you, your community and the world. The book is infused with the ideas and thoughts of a group of textile artists, all of whom have a connection to people, places or objects and who communicate their feelings through their art....It is a highly absorbing read and I don't think you will even break the surface after one read.'
(Workshop on the Web, September 2015) Reviews on textileartist and on Art Quill Studio    (The Quilters Magazine, Autumn 2015, ' 'Her most in depth book yet' Embroidery Magazine Nov/Dec 20150. You can also see some examples of Jacqui Hurst's lovely photography in the book here.)

The Found Object in Textile Art 2010 'Great for help to make use of so many things around us. Stimulating ideas and practical help on methods. Every time I look at it,I want to start on projects....so,yes,a useful book to have if you collect things because you can always see potential in anything!
If you don't have this tendency,  you will when you have read it!

Connected Cloth,  co author Anne Kelly. 2013  Authors Cas Holmes and Anne Kelly, have been involved in a very productive collaboration for the last three years and often take part in community textile-art events and exhibitions. This book looks at working collaboratively, providing useful information on setting up a group, finding venues and setting ground rules, plus a wealth of practical inspiration for ways to work together. 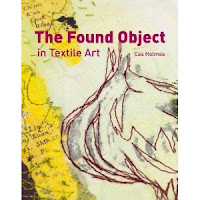 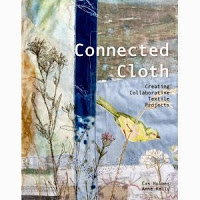 Author interview on Batsford
Podcast on Stitchery Stories by Susan Weeks. Discover how Star Trek links to landscape and creativity and Arnolds Attic at the Knitting and Stitching Show.

I write for a variety of publications from Embroidery Magazine, Cloth, Paper Scissors, and Fiber Arts Now, to on-line articles for TextileArtist,  Workshop on the Web 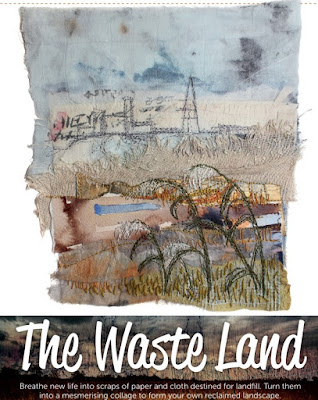 Further articles and interviews are listed below 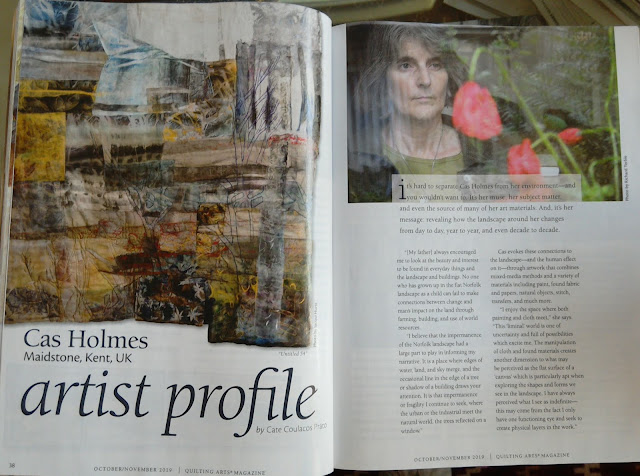 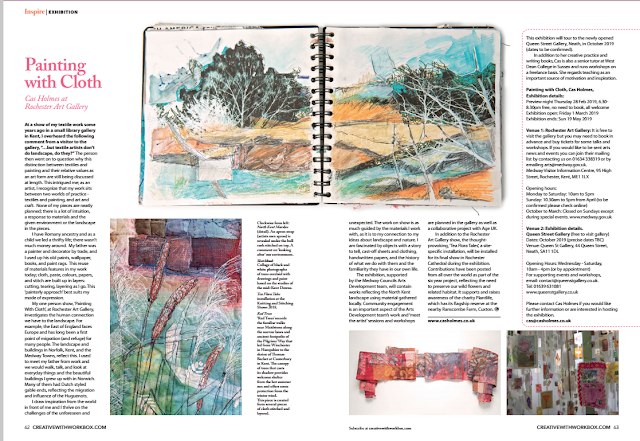 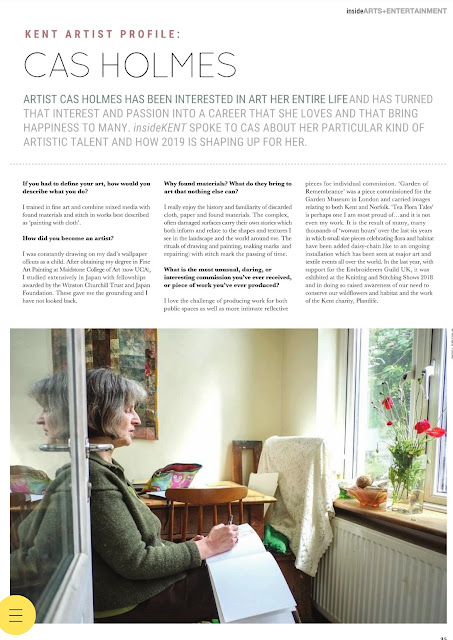 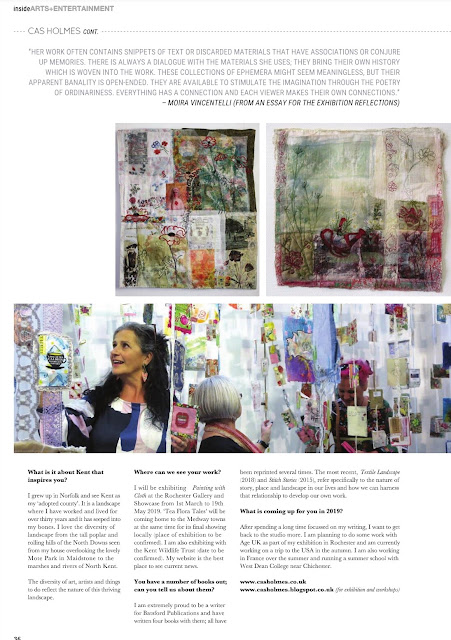 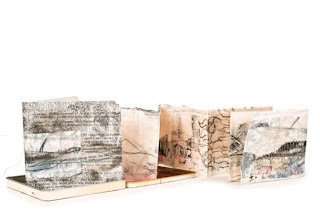 Feature on Textile Artist February 2019, Learn to Stitch Textile Landscapes like a Master. 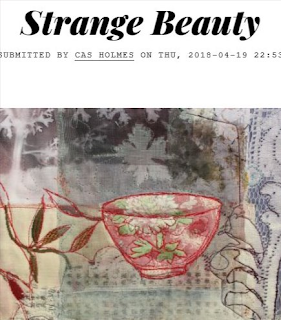 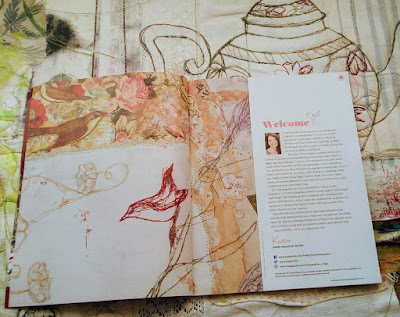 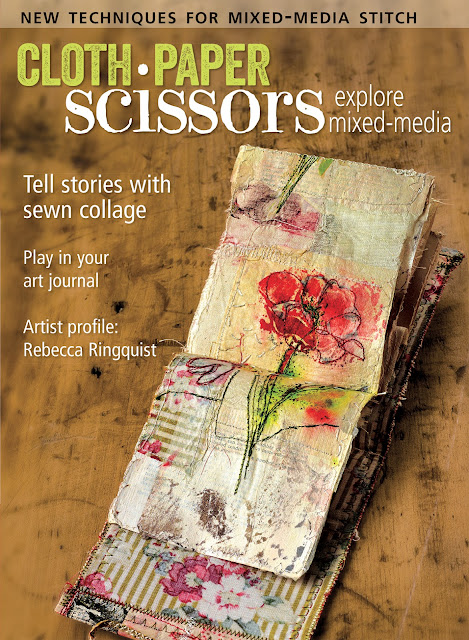 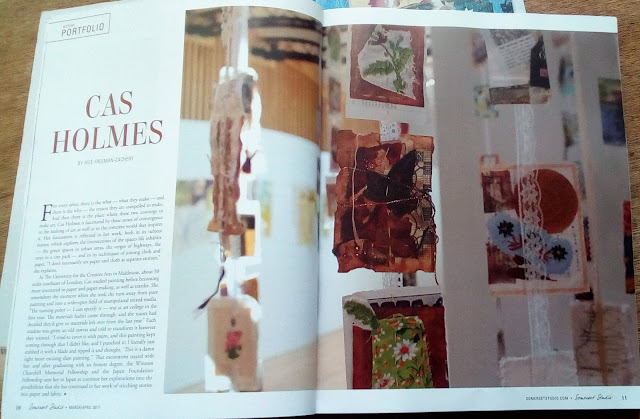 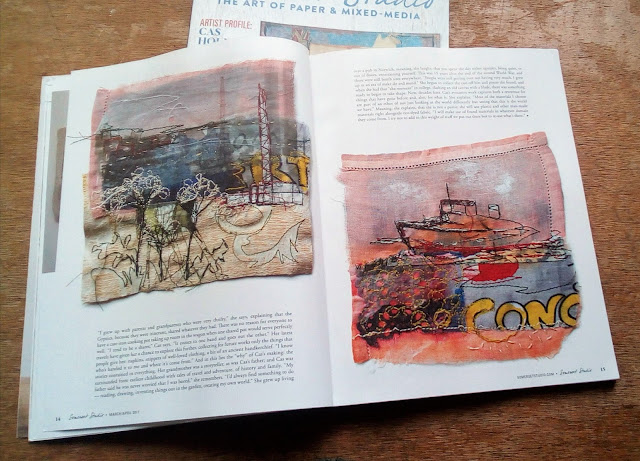 Artist profile in Somerset Studio magazine (March April 2017). An interview by the Rice Freeman-Zachery.Sneak peak of some of the pages from an eight page spread. 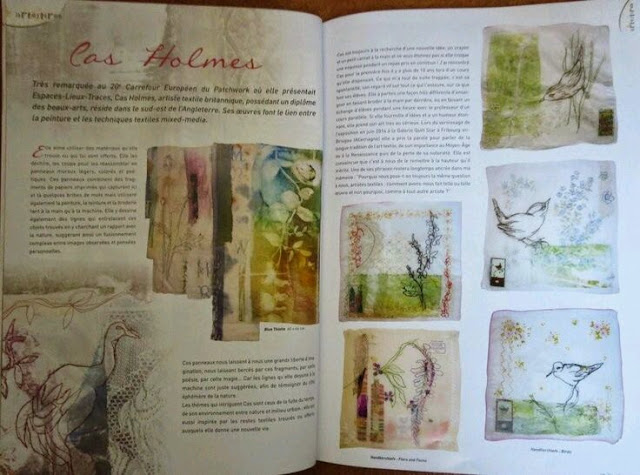 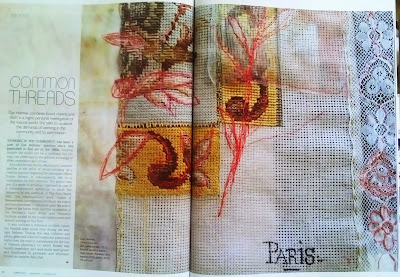 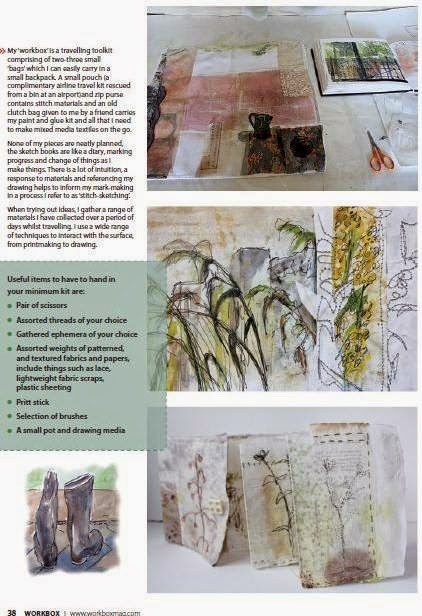 An article (left) about my portable workbox and approach to working whilst on the move in the November/December 2013 of Workbox Magazine.
http://www.workboxmag.com

Cas Holmes: Urban- Nature reviews relating to Knitting and Stitching and follow on Shows at the Beaney in Canterbury and in Germany.
On a recent visit to Canterbury I wandered into the Beaney, something I often do now it has been so well refurbished, and found myself captivated by a new exhibition in the Front Room. Cas Holmes is a textile artist based in Maidstone who produces mixed media work blending 'found' fabric and her own delicately stitched designs.

None of the pieces, some suspended in the air, some hung against the wall like pictures or tapestry, can be understood at a glance. The viewer's attention is demanded and greater attention rewarded as layer upon layer of meaning is revealed. The material on view consists of fabric rags: scraps of torn lace, pieces of sheet or clothing, newspaper, curtains or cushion covers. Sometimes these have a printed design. Sometimes they are worn and dirty, stained by the situation in which they were discarded. Joining all these fragments are the stitches of Cas Holmes who has rescued these pieces of her environment and created something new from them. The stitching is sometimes sturdy and used to hold things together. At other times the stitches are purely decorative and consist of sewn drawings, the outlines of birds and locally found flowers.
The essences of people, their memories and past lives, seem to linger, trapped within the fabric substance on display. Many of these materials will have had direct contact with skin and might have witnessed or taken part in key events in human stories. Saved from dereliction they are resurrected in the creations of Cas Holmes and haunt us with their fragile communications. Woven into each piece are the ideas of Holmes herself and images from the natural world. Like the singing of birds or the beautiful potential in a budding flower these works speak to us with a language that is hard to rationally understand but is keenly felt nonetheless.
Huffington Post, Mathew Crockatt, Dec 2013

'Cas Holmes’ textured, translucent, and intricate textile art is a testament to the history of this medium, as well as the social and political undertones that it implies. Devoted to incorporating historical and found objects in her artwork, Cas creates layers of both fabric and meaning, inspired by her travels, her hometown of Maidstone in Kent, England, and her interest in the societal role of textiles both past and present. Her stirring work has been well recognized in her community; she recently received the Pride of Britain award from the NRI® Institute for her research in India and the resultant body of work exploring her Romany gypsy ancestry. Read on to learn more about the myriad forces that shape her work.'
(Pippa Eccles, Curious Cloth, Quilting Arts Magazine)

During a lunch break, she sketched the classroom venue and then later, on a group walk, she encouraged us all to do the same.She brings this quality to her thread painting- which is more thread sketching with frenetic stitchlines that capture movement and personality. The simplicity of her thread sketching brings a charm to her work and a sense of urgency;as if we need to look now to see a moment or thing before it is gone.This simplicity can also bring reassurance to any of us- to say that we need not worry about the perfection of every line of stitching. In this medium, we can cast off the yoke of perfectly spaced, even stitching and embrace the moment of 'doing.'
(Deborah Bates Stitchstress 2010)

Here she included letter fragment, recycled fabrics pieced onto her papers. Her effective use of colour brought earth and plant tones to the work in a way which still kept its airiness.. One was immediately encouraged to move towards the six large machine, hand stitched and collaged paper hangings by Cas Holmes. Hung from wall to wall across the centre of the space, they towered above and below eye level. The stitched marks on these pieces became line drawings of plants cleverly using the open space of the painted fabric backgrounds, bringing a feel of open air and lightness inside the gallery. Clearly visitors were intrigued by the materials and techniques used. Air movements created by people passing the hangings brought extra life to the work.
(Review of Natural Histories, Brenda Parsons)

'Looking at translucent layers, connecting paint, mark and print with the found surfaces of fabrics and papers she seeks the 'hidden edges' of our landscape, the verges of our roadsides, railway cuttings and field edges, the places where our gardens meet the outside spaces. Worked with what Cas describes as 'stitch sketching' these atmospheric pieces seeking to capture a moment or thing before it is gone.'

(The Year ahead, Embroidery Magazine 2012)
'Her composition is achieved through the internal organisation of verticals and horizontals, leaving a feeling of openness. ‘Iris and Sparrows’ and ‘Madder’, for example, seem to float off the wall, the latter retaining the glow as well as the formality of a Rothko.This dichotomy of flow followed by full stops running through the exhibition like the pillars of a Greek temple, gives a rhythm to the gallery'
(Janet Sturge, Natural Histories) 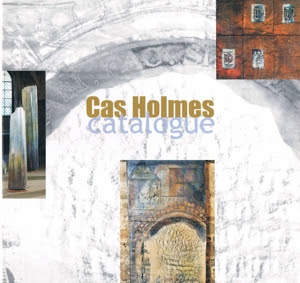 Cas Holmes is deeply moved by the stories of ordinary people's lives the births, marriages and deaths;the diseases brought on by harsh working conditions and the way these hard facts are hidden from history, forgotten with the passing of time. Her work often contain snippets of text or discarded materials and objects that have associations or that conjure up memories. There is always a dialogue with the materials she uses.They bring their own history, which is woven into the work

Moira Vincentelli, from  article for catalogue of Reflections exhibition.

Lovely article by Sarah Salway in her Writer in the Garden series July 2013
Artist interview  on Jane LaFazio's Blog 2013
Sketch to Stitch, Stitch Magazine.August/September 2013 www.embroiderersguild.com/stitch
Sustainable Art, Art of Quilting. May 2013
www.textileartist.org/ An article on my life-work and home. Reflecting on the use of the found in all areas:
Festival of Quilts and Knitting and Stitching Brochure and on-line 2012
The Quilter Summer 2012
The  Art Quilting Studio Magazine, Summer 2012